Sometimes the things you look forward to the most don’t turn out exactly as planned…  That was today’s lesson, as we stood shoulder to shoulder with a crowd outside of Charlotte’s Regal Park Terrace cinema, waiting for a fifty year old time capsule to be cracked open.

To my surprise, I felt more like a Charlottean than ever before as sixties music filled the air and people browsed through a display of artifacts from the era — a local phone book from the ’50s, a vintage Battleship game, an air raid protocol poster, old records, a retro TV, a viewmaster, and more.

We all wondered what would be inside this box buried in front of the theater the same year The Beatles came to America, during the height of the Civil Rights movement and as the Vietnam War raged on.

Some people around us reminisced about when the movie theater first opened or spending Saturday mornings there as kids in the ’60s and ’70s. Others remembered an even earlier time when this land had simply been an empty lot, before the Park Road Shopping Center’s arrival in the late ’50s — when it became the first outdoor shopping center of its kind in Charlotte and the largest in the region spanning from DC to Atlanta. 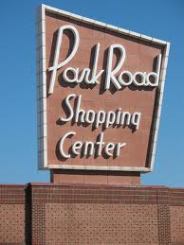 It didn’t matter that we are not orignally from Charlotte. My husband and I, like so many residents, are transplants from other places far away. Having lived in Charlotte for almost eight years now, we have our local memories too: celebrating a belated St. Patrick’s Day over a pint of Guiness at Sir Ed’s days after the birth of our first son; family dinners at The Flying Biscuit; watching the kids test the goods at Toys & Co.; hearing my young sons squeal “cookie, cookie” as we dash into Harris Teeter for some groceries; listening to community members read Dr. Seuss books at Park Road Books; and of course seeing great independent movies on those too rare date nights at the Regal Park Terrace.

Suddenly, today, I realized that we really have become Charlotteans. Just by going about our everyday lives we’ve set down roots in this place. We are a part of this city and just like everyone around us — the young and the not-so-young —  we hoped that we would discover some missing piece, some clue from our collective past when the time capsule would be opened.

And what did they find inside the sludgy, muddy interior? Pieces of decayed newspaper, a mysterious reel of film, the binding from a now disintegrated notebook, and a key to the city.

Some people were disappointed. They called the event a “bust.” But I don’t see it that way.

The half hour before the ceremony was magic for me: chatting with the people around us, sharing stories about the past and the present. We hugged our kids, admired the vintage car parked next to us, and mouthed the words to classic songs.

The joy for me was in participating in this scene — experiencing a strong sense of community, even though we were mostly surrounded by strangers. The anticipation before the opening and the chance to revisit the past collectively were a unique gift. I realize now that it really didn’t matter what was in the box.

Ultimately, it’s a shared vision — imagining possibilities and commemorating our past — that binds us together. It gives us a sense of belonging. It’s the true key to the city.

4 thoughts on “The Key to the City”